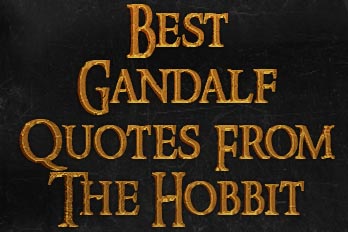 Gandalf is almost certainly one of the most likeable characters in both the lord of the rings and the hobbit. Gandalf the grey, as he is throughout The Hobbit and part of The Lord of The Rings is known for cracking great quips and quotes. Here we have gathered together some of the best Gandalf quotes from the hobbit movies, so settle in for some high-quality wizarding one-liners. While you are here why not check out our other LOTR posts, such as why does frodo become invisible? and why does frodos sword glow blue?

Gandalf Quotes From An Unexpected Journey

“True courage is knowing not how to take a life, but when to spare it.”

“I found it is the small everyday deeds of ordinary folk that keep the darkness at bay.”

“The world is not in your maps and books. It’s out there.”

“Home is now behind you… The world is ahead.”

Categories: Films, Lord of the Rings, The Hobbit 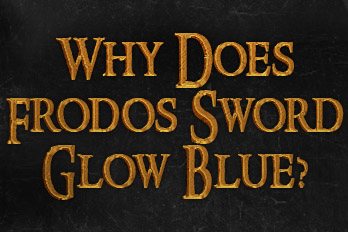 Anyone familiar with the Lord of the Rings films or books will know that Frodo’s sword, sting, glows blue whenever orcs or goblins are near. But why does Frodo’s sword glow blue? What gives it this magical property.

Frodo’s famous sword, an Elven dagger created during the first age, long before the events of the Lord of the Rings. The blade was forged by the famous weapon smiths of Gondolin. Little of the history of the blade is known but it is speculated that the blade was lost during the Fall of Gondolin. How exactly the blade came to be in a cave troll where it was then discovered by Bilbo is completely unknown. Bilbo then gifted the weapon to Frodo before he embarked on his quest.

Why does it glow blue?

The simple answer is that Elvish swords were made to glow around orcs and goblins, as this passage from the books explains:

“being the work of Elvish smiths in the Elder Days these swords shone with a cold light, if any Orcs were near at hand.”

Note here how the swords shine with a cold light, the only sword described as having a blue light specifically is Sting although we can determine that a cold light probably infers a blue hue.

Do all Elvish blades glow?

No, simply put not all Elvish blades are known to glow in the presence of Orcs. While it is true that Sting glows because it is an Elven blade it does not follow that all Elven blades glow. We are told in the books however that both Glamdring and Orcrist also glow. These three blades were all forged in the First Age in Gondolin, thousands of years old by the time Gandalf and Bilbo find them. These are special blades forged for kings and worthy warriors, so this could be special high tech not used in all Elven blades.

But Glamdring doesn’t glow in the films?

This is a mistake, as you can see in the earlier passage from the books all three of the swords found in the goblin cave glow. We must just put this down to an oversight on the part of the filmmakers.

Categories: Films, Lord of the Rings 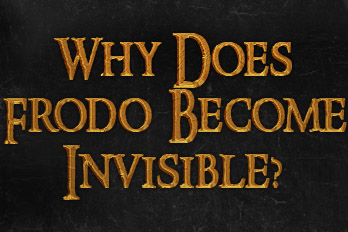 As we all know when Frodo slips on the one ring he disappears from sight, but why does Frodo become invisible?

The answer is quite simple, when the wearer puts on the ring they enter the wraith world and are hidden in the physical world.

Some beings exist in only the physical world such as humans, hobbits, many elves etc whereas others exist in just the shadow realm, such as the wraiths. Then there are others still who occupy both. Divine beings such as Sauron exist in both worlds, interestingly some of the elves also exist in both as does Gandalf. So if Gandalf was to wear the ring he would not become invisible.

We know this from the books, from passages such as this:

“You were in gravest peril while you wore the Ring, for then you were half in the wraith-world yourself.”

So why were Frodo’s clothes invisible then?

So the ring transfers the wearer partially into the shadow realm, why would this make their clothes invisible too? Well, its never really explained. The ring was originally created by Tolkein as a plot device to give Bilbo the ability to turn invisible. It would therefore also need to make any clothing invisible to work well as an invisibility device.

What would happen if Frodo never took the ring off?

Well to start with he would be in immense danger, being visible to Sauron. But if he somehow managed to evade Sauron he would slowly submit to the power of the ring, eventually becoming a wraith himself.